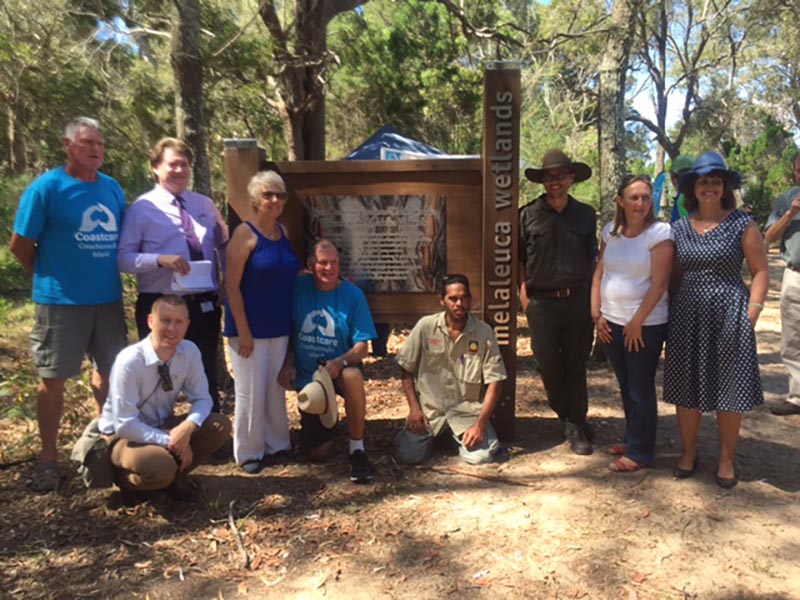 Yesterday’s opening of the wetland’s interpretive signage project by Australia’s Threatened Species Commissioner, Gregory Andrews  was an inspiring occasion. From the Quandamooka Welcome by Patrick Coolwell & his mesmerising didgeridoo to the Commissioner’s address with sobering statistics on the rate of extinctions.

Commissioner Andrews said Australia has endured the worst rate of mammal extinctions in the world losing 29 mammals since Europeans arrived. “Ninety per cent of the animals found here are found nowhere else on Earth. They define who we are as a nation. Australia is a large and rich country and we can avoid extinctions if we focus on key threats like invasive species and  pet ownership.’’

Our thanks go to Councillor Lance Hewlett, Master of Ceremonies and Deputy Mayor, Councillor Wendy Bolgary who moved the Vote of Thanks and also Coastcarer, Olive Walters who assisted Commissioner Andrews to unveil the signage which was funded by a 25th Anniversary Landcare grant.

The Commissioner was determined to explore the island and understand issues like weed infestation and feral animal management. He couldn’t help but notice the paw prints on beaches and query the impact on migratory shorebirds.

What can you do?
Become a member
Junior Rangers