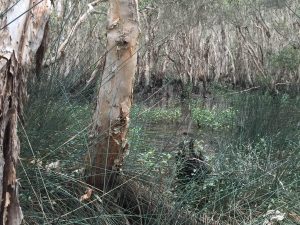 There’s nothing more stunning than the afternoon sun streaming through the melaleuca wetlands between Phillips Street and Elizabeth Street, or those on Carolyn Brammer’s property,“Mudlo.”

The importance of these endangered ecological communities has now been recognized by the Australian Government along with the core of our treasured Melaleuca Wetlands on the eastern side of the island. Read the Conservation Advice for the Coastal Swamp Sclerophyll Forest of New South Wales and South East Queensland (PDF).

Effective from 8 December 2021, the Coastal Swamp Sclerophyll Forest of New South Wales and South-East Queensland ecological community was listed in the Endangered category of the threatened ecological communities list under the Environment Protection and Biodiversity Conservation Act 1999 (Cwlth) (EPBC Act).

Redland City Council has confirmed the three wetlands are included under this federal advice.